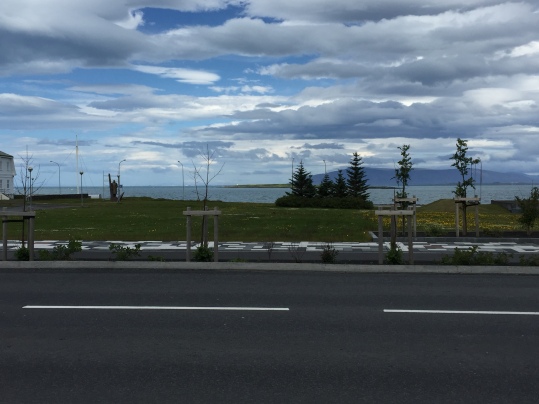 You can go so far north on this earth that everything feels like a dream.

Iceland is strange. There seems to be something secret but in plain sight, known and familiar yet obscured. An odd little animal, peeking from behind glass.

It was summer. There was light all day and all night, pausing in its great gasp for a momentary rest. Every day for a week there was a strong wind, cool and mild.

I was broke — good for the curious traveler, but not the most helpful thing to be in Reykjavik. We were camping, three friends crammed into a little wooden hut, rented on the other side of the fence from the botanical gardens. We ate potatoes ten ways, and hot dogs from the kiosk, topped with three types of onions.

There is a bus between the airport and the city, a 40 minute ride through the lava fields and the coastline. All the trees fell long ago, and eruptions have split the chapped land apart, sparsely lined with brush and grass. At the time I was reading an article about a murder and false confessions, about how the body was never found, so it wasn’t technically a murder, about how the authorities couldn’t say for sure how many bodies were down there with certainty. The land acts as a witness. It knows.

The walk downtown is framed by the sea and large slabs of tectonic rock, whistling and riddled in holes. The brisk smell of atomized sea salt is broken by the waves into scattering particles. The opera house was designed to look like a whale, beached on the shore, the mammalian skeleton encrusted in glass.

The streets are very clean here, everything in line with Nordic sensibilities. The famous church feels sterile and thoroughly unused, as if everything and the organ was covered in plastic furniture wrap to prevent stains, though of what kind it is hard to say. 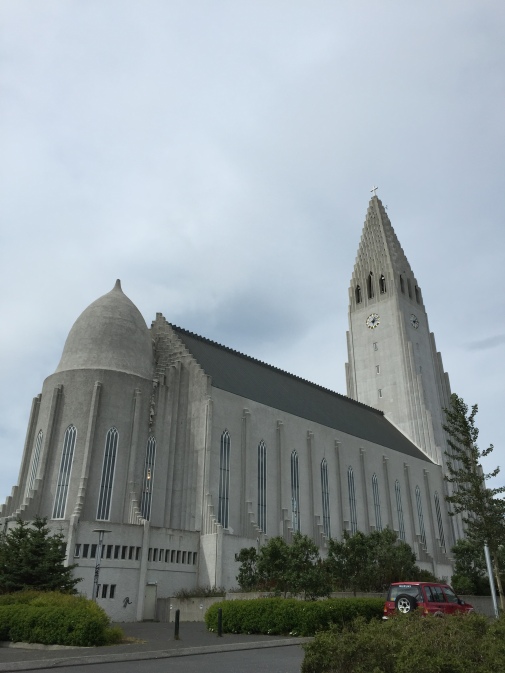 The Icelander is peculiar. Perhaps just as strange as the land, in a good way. When you live in darkness for half your life and light for the other, you begin to think in nocturnes, sonar, the sound of your presence echoing over dark fields and the water. Something in you reverts to the primal time when we told stories by firelight to take our minds away from the unending night and all it hid from us. It must feel very solitary, your essence turning inwards for the reflective season. Winter does that.

Death metal has a strong presence here. I can only assume it has something to do with the long winter, or perhaps clashes with the curt brevity of Northerners, or accentuates the inner anguish at being held apart at arms-length all the time, but I haven’t quite figured it out yet. I am an outsider after all, from a sylvan place where it is always warm, where we lose our minds and all semblance of society if ice appears. I would not know what to do if the long night came; I expect I would stay indoors. 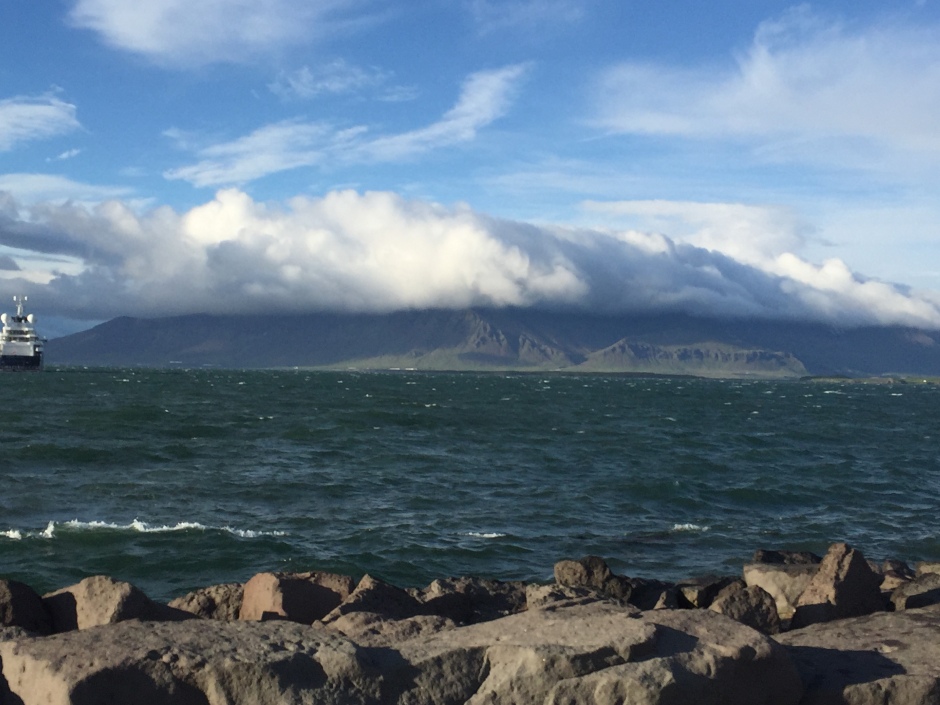 The public pools are a point of pride, for good reason. You must shower first before going in, and this is where the American runs into trouble. Even among your own sex there can be a hesitancy to be naked, a nervous laugh, because we have been taught to be very conscious of our natural form. I did mind, but not much. Life is too brief to be frightened about something so insignificant. N’importe quoi.

Once you pay the toll of bodily humility, there are winding steps up to the indoor pool, then up to the tubs, then the separate tanning and lounging areas, covered in a plastic green grass. A Norwegian asked me and my friends what books we liked to read; I think our tastes were too English for his liking, but we offered Ibsen as consolation.

We chat, we swim. I’ve never used a diving board, full to the gills of stories from my mother about spinal injuries and paraplegics, but the water is deep, and I springboard off, feeling my heart churn madly as I come up for air. The weather is not warm, but we sit in the sun and dry off.

The showers at the camp smelled of eggy sulfur. There was a communal kitchen, with plenty of brown sauce left by other campers. Reykjavik has a very lovely design; its lines are all practical, our camp lounge all made of glass, like the beached operatic whale; like a greenhouse, it was warm, and, more importantly, it let all of the sun in. 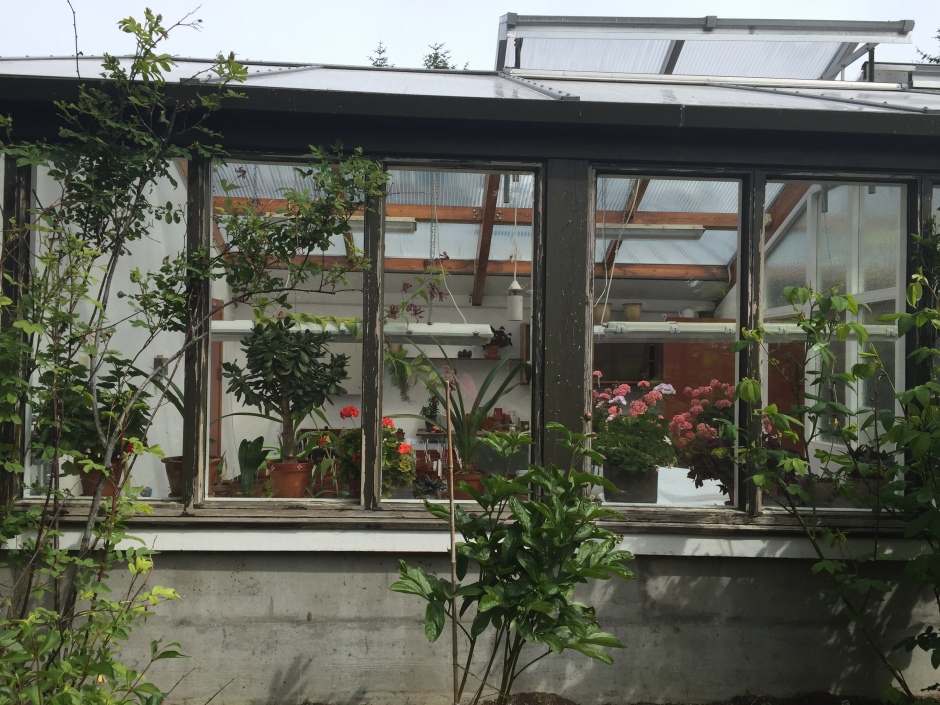 I spent an entire day at the gardens by myself. My friends had gone to an elvin village and I had wanted to stew in imposed misery over a faux pas the day before, errors of miscommunication.

Disappointment is not a particularly welcome feeling, because I had thought a birthday abroad meant the day would be special and because, more so than any other day, you want to feel celebrated, and being served with the fact that you and your day are just as ordinary as anything else feels like eating a cold lunch when all you wanted a hot meal.

So I was in the gardens. I felt hurt, and forgotten, and I wanted to be around the plants. I thought, about too many things. I thought about the Agony in the Garden, and how ridiculous I felt for even thinking about it, because it’s one thing to have an internal tantrum over a bad birthday, and it’s quite another to be a Messiah on his knees coming to terms with his eventual betrayal and execution.

My head was not on the block; I was in a place that felt like a dream. I was very glad I was there. There are some dreams, however, that are more lonely and more beautiful the longer they continue, and I was getting tired of the sun always being around.

I’ve written before about traveling in loneliness. I don’t often feel lonely, so perhaps I should say solitary instead. There are moments, clear and lovely and helpless, that always find me when I least expect them, usually when I travel but sometimes not. I will be alone, outside, in a setting where everything synchronizes into a moment of epiphany where at once I realize the utter solitude that haunts myself and every other being on this rock, and yet I am overwhelmed by a terrible love, a love of everything, a love of the day or night or whatever time it is, the air, the sky, people. It affirms the singular reason why I bother to do anything, lights everything from below, and, just as illusory in its content and form, it goes by quickly — very quickly. But, it convinces me that I am not a pessimist. “To be a pessimist means I have accepted that life is an academic matter,” and there is nothing academic about the moment that feeling comes upon me.

My friends bought me a cake the next day, using a trick from a movie, writing ‘sorry’ out in candy. I believe that, more than anything else, I wanted a gesture, something to acknowledge that my time is relevant and that someone would notice if I was there than if I wasn’t; a respite from solitude. 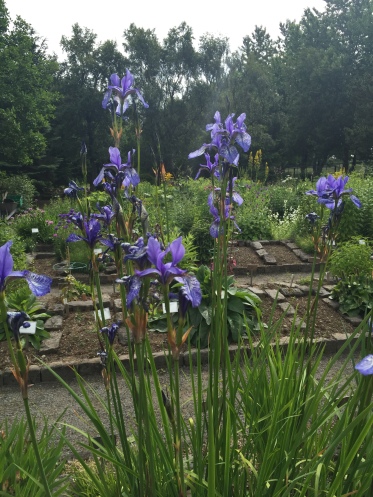 We flew out the next day. I had a book with me, more of a bound packet of texts, that I had picked up at the camp’s shelving for wayward and donated items; hiking boots, maps, various loose packets of sugar, discarded literature. This one was strange, full of Kafka excerpts, clips from Dubliners, an article about the 1973 eruption of Eldfell, a volcanic cone on the island of Heimaey, in the southwest of Iceland.

The fire was sudden, tephra rains blanketing everything in flaky pieces. The apalhraun flows were orange, dense, over a hundred feet thick; not the explosive pyroclasts of Pompeii, which crash hard like waves, but a slow, heavy tide coming inexorably in.

How hard that would be to watch; no sudden destruction, but a creeping dawn of desperation, mile-high candles of fountaining lava in the distance, closing in on either side of the harbor, the main artery of your existence. First, they used firehoses, then helicopters, and then turned at last to the water, pumping ocean until it cooled into toughened crumbles of ash.

The excerpt was a chapter from the book “The Control of Nature,” an academic investigation to our relationship with the rock, something quite sacrosanct, perhaps too much so. It’s definition often escapes intelligence, often is something you feel, not something you know; connaître vs saisir. What did I know of the land? What did I know, really, other than what the island told me? How does it make us feel?

It is hard to come to conclusions; a reoccurring theme of mine, it seems. What does the earth ever say when we bother to listen? Iceland was an oddity, the form hidden despite all the light; ice in the sun. The crystal palace, a greenhouse in the garden, incubating and temporary.

I will go back, one day. I’d like to visit it in the nighttime.