There is an inherent property of water: once it is spilled, it cannot be un-spilled; there is no take backs, no true remedy to rectify the act of spilling. When there is no container, no shape to conform to, where can the water go, but outwards? Mother, Bong Joon-Ho’s fourth film, is often overlooked, wedged as it is between the more well-known features The Host (2006) and Snowpiercer (2013). It focuses on the unnamed, titular Mother, who attempts to free her mentally challenged son after he is convicted of murdering a local schoolgirl.

Ultimately a tale of truth twisted around mistaken perceptions, Mother addresses the more ephemeral aspects of crime and justice, an investigation into the little coincidences and occurrences which build together into coherent fact. It asks the question that all mysteries demand, the who, the what, the when-where-whys, but it also transcends the banality that belies all crime, and looks into the motivations of the people behind it, victims and conspirators alike.

“There are only three motives for murder.

For much of the film, it is raining. While this does serve to create a brooding, moody atmosphere, a staple of film noir — much like Se7en or Blade Runner 2049 — it also serves to underline the central conceit of the film: water, when it is spilled, has the ability to wash away the fact of substance, muddying elements of truth into workable factions.

When following the investigation of a crime, what does the audience look for? What are we expecting to see? The truth, naturally — we want to see who did it, and why, and what will happen to them, if they’re caught or go free. But the crux of most film noir is that we do not follow the culprit, but the investigator. We become involved in their choices, their morality, their situations. Their perceptions become our perceptions, and therein is where most stories can elevate themselves, because humans are fallible, and we are often just as wrong as we are right.

The medium of film is, of course, ripe for metaphor, and allows us to take visual cues for how we are supposed to view characters from the way they are positioned and shot. From the outset, Mother frames its characters interior motivations — literally — by the setup of the frame. 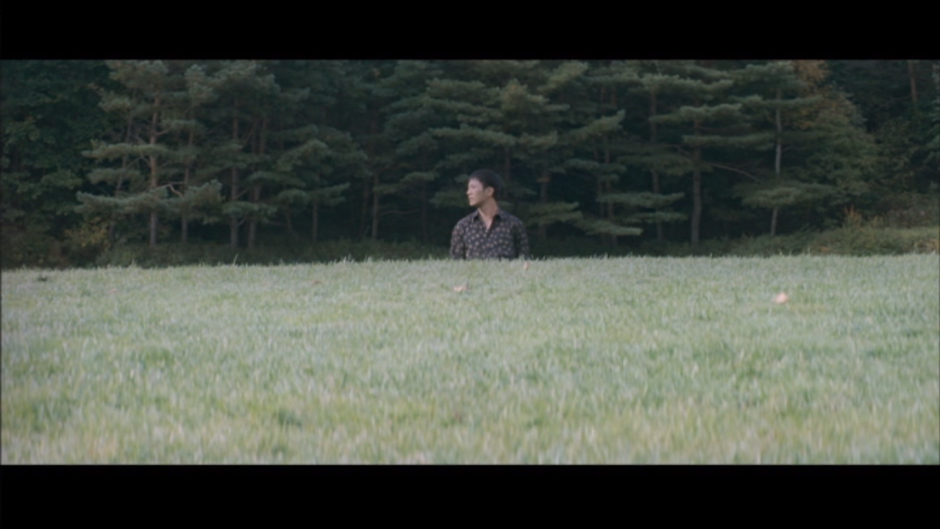 This is one of the first appearances of Jin-Tae, the only friend of the murder suspect Do-Joon. He is an apathetic, morally grey middleman, one foot in crime, and the other in misdemeanor; his motivations are frequently questioned, to the point where Mother considers him a suspect who framed her son for murder. Ultimately, we learn that her, and our, suspicions are incorrect, but we are nevertheless left with how we are initially introduced to Jin-Tae, a man literally in the middle of the frame.

“Is it true? You really sleep with your mother?” What does this shot above tell us about Mother, and Do-Joon? What are we supposed to see?

Mother, like many film noir protagonists, is deeply solitary; she has few comforts in life, aside from her only son, and her devotion to him drives the whole narrative forward. Here we are supposed to see the co-dependence of mother and son, how they are so involved that they share a bed, even as adults. But because we are shown their inherent value to each other, we also must consider what would happen if one of the two wasn’t around; who is Mother without her son, and vice-versa? 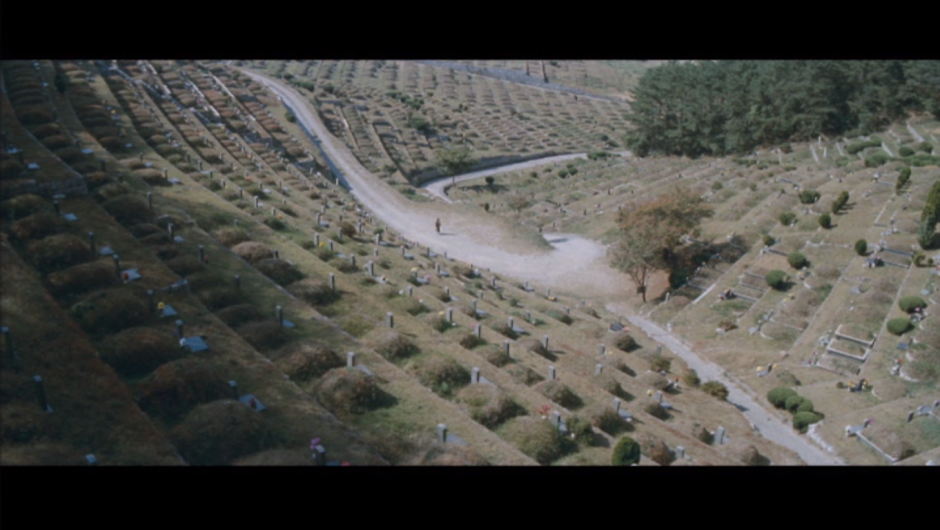 She is a transient, a wanderer between points of truth and conflicting facts. She remains solitary, as shown in the shot above, walking a long, lone sojourn, for the mystery of film noir again is not in the crime itself, but the players, and the detective who looks for truth in an absurd world which lacks morality and frontward-faces the crisis of mortality. When we strip away the exterior ornaments and features, who are we on the inside? What can we point to that is of our making? When water spills, what form does it take? As the story progresses, Mother finds herself spiraling into the morally grey matter that surrounds all crime. What lengths will the criminal go to, to hide their involvement, and what is the investigator willing to do, to uncover it? Often, the actions of both run parallel more than negative; there is always the chance that the one who seeks the truth will have to play on the liar’s level, and when the truth is found, what are we to make of it?

“There is a meridian point that can loosen the knots in your heart, and clear all the horrible memories from your mind.”

What do we know of Mother — what has this film told us about her? She loves her son, incredibly so. She is resourceful, and determined to free him from what she sees as an unjust conviction. She has all the qualities one would want in a good investigator…

But her love for her son is also her greatest weakness. It hinders her as the movie continues into its final act, and ultimately it completely negates her ability to parse the truth from her own perception and bias.

Just as with the rain, there is an underlying ramification of spilling: Mother’s love for her son clouds her judgment, and causes her to make mistakes, to overturn vessels and send their contents scattering. One of the hallmarks of film noir is that the truth corrupts; it is just as often damning and it is freeing, and the protagonist suffers for learning it. It leaves the audience questioning everything — whether the price was worth the effort, and which was worse, the crime, or what it uncovered, what it revealed about our own inner nature? If the truth is not what we expected it to be, what are we to do about it — should it be acknowledged, or rearranged to fit the ‘right’ narrative? Mother is a fascinating investigation on its own, into how we view love, how we view each other, how the introduction of crime and punishment can change our perceptions in ways we never imagined, even if the truth is presented right in front of us.

It asks us: what can you do, once the water is spilled?