Where the hell does one begin with Fargo? It is a twisted tale of murder, staged kidnapping, insurance fraud, mallard stamps, and pancakes; it’s a story about human selfishness and greed, mediocrity inspired by suburban living, yet it also is about persistence and the dogged pursuit of fact against circumstance. 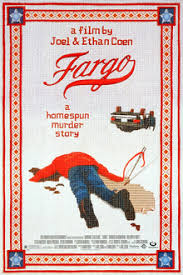 This claim is more of a misnomer than a claim to fidelity; the Coens themselves have waffled back and forth on whether the crime actually happened, which I don’t mind because I thoroughly enjoyed the story spun around the act of the crime than I was with the fact of it; the plotline, really, doesn’t much concern the crime itself as it does the circumstances around it.

The first person we are introduced to is Jerry Lundegaard (William H. Macy); any hope that one may have that he is our protagonist are dashed almost immediately: he is meeting two hitmen, Carl and Gaear (Steve Buscemi, Peter Stormare), the former dressing in two-tone colors and the other nearly always silent and smoking. Jerry wants them to kidnap his wife so he can graft money off of his father-in-law to pay for a floated loan.

For, what else could Jerry Lundgard be, but a car salesman, and the only one on the staff wall who doesn’t have an in-profile picture? He can’t even do that right, which is why Fargo, among other exploits, is a tale of human error.

Who is our hero? Not Jerry – a mediocre salesman and an abject failure, belittled by everyone he meets from the first scene til the last and so eager to please that he readily accepts the first available option offered to him, good or bad. Carl and Gaear are the villains, trigger-happy and only concerned with their score, and maybe a few escorts along the way. (Gaear, an apathetic Nordic foreigner, is much like Peter Stormare’s later character, the nihilist Uli in The Big Lebowski; contrarily, Steve Buscemi’s Donny is told to “shut the fuck up” constantly partly because his character Carl in Fargo never stops talking).

We can’t place any faith in Jerry, who practices his emergency call (all are unconvincing), or his family—his wife knocks herself out during her own kidnapping, falling down the stairs after she gets tangled in a shower curtain, and his father-in-law, insistent on getting his way, is a businessman who looks at the lowest priced ransom possible.

The setting adds much to the bleakness of its inhabitants. Suburban Minnesota in the dead of winter, where the residents are routinely conned into buying sealant paint on their cars, hitman and their escorts watch The Tonight Show in a comatose post-coital numbness, and the only reliable person around is a no-nonsense cop with a disarming smile and polite insistence; Marge Gunderson (Frances McDormand) is our hero, and she doesn’t show up until thirty minutes in, called into work because of the short-sighted, panicked actions of Carl and Gaear, the latter of whom  kills a state trooper to avoid having their plates run, and then runs two witnesses off the road, capping both of them to ensure their silence.

The soundtrack is as spartan as the landscape; plain, the mournful sound of an accordion, or a sweep of strings occasionally punctuating the vast silence.

In many ways, Fargo is the bizarre inverse of its predecessor, Pulp Fiction; instead of the two hitmen spouting philosophic, cool conversations, these two, by comparison, are their antithesis, bumbling and graceless, where one never stops talking and the other never says a word; their conversation about Pancake House seems like the negative of Pulp Fiction’s Royale-with-Cheese scene – they never agree on anything they talk about, and they never really seem to get along, much less enjoy each other’s company.

Although most of the plot of Pulp Fiction is a product of circumstance, in Fargo the plot is a product of circumstance that the characters bring onto themselves; human error, not happenstance. The whole plot begins as a continuum of Jerry’s own mistakes with the loan, and it spirals out of control from there; Gaear kills the state trooper when Carl’s attempts at bribery fail; Margie is introduced (and unravels the whole case) because of the roadside murders; Jerry’s father-in-law is killed for his poorly-considered attempt at bulwarking; Gaear kills Jerry’s wife because she ‘started shrieking’; and Carl’s lakeside hideout is discovered because he just couldn’t shut the fuck up.

It’s as if no one can help themselves, too busy concerned with their own ends to notice their mistakes. By contrast, Margie swoops in and neatly solves the whole thing, mainly because she is an efficient investigator, but also because it all has been laid out so cleanly; no one has bothered to hide their tracks or their involvement. Their crimes are a product of necessity as well as their inability to think ahead.

There is no Mia Wallace, or Marsellus, or Butch; they all play against each other too well, and Butch, when he does cheat on the fight, has an escape plan because he planned ahead. When there is an accident – “I just shot Marvin in the head”, Mia’s overdose – the characters manage to get away with it, because everyone has a head on their shoulders in times of crisis. Even the soundtracks are total opposites; where Pulp’s is retro and flashy, Fargo’s is simplistic and spartan.

But, more than it is the converse of Pulp Fiction, it mainly differs because everybody in Fargo is always eating; I can only imagine this is because the Coens think it’s funny, but also possibly because in the dead of winter in Minnesota, what else do you do? You stock up on fuel, fat and carbs, to withstand the cold; the downside of that is that it slows you down, mentally and physically, and I’m not sure I saw anyone in the film eat something healthy, or even green. Perhaps these beige plates are just an extension of the setting, perhaps the Coens have a vendetta against Weight Watchers; we just can’t know. 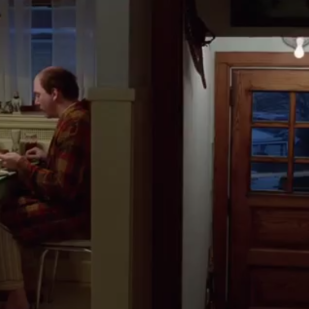 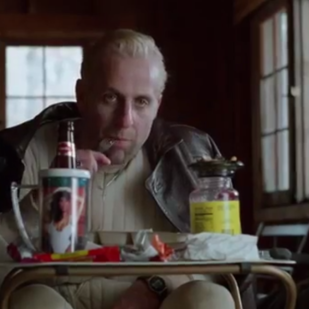 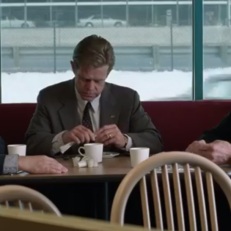 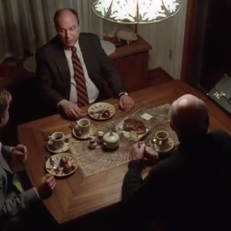 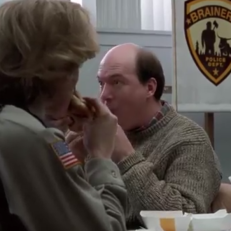 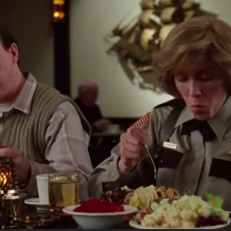 Comparisons aside, Fargo stands as a classic on its own; it is an investigation into film noir, detective stories, the rambling threads of our own designs that we tangle ourselves in. It is a study in our mistakes, our mortality, the subversion of greed and self-centered gain by wholesome simplicity. Despite the bloodshed and the mayhem, the film ends on a positive note; Jerry and Gaear are arrested, and in the very last scene as they climb into bed, Margie’s husband announces that his mallards have won a spot on the three-cent stamp, and they talk about the upcoming birth of their child. Fargo, ultimately, is just as much about the corruption and darkness of everyday people as it is about the little things in life that reinforce our belief that it should be worth living.